CALL US FOR MORE DETAILS

My Study Trials and Tribulations! – Part 1

Our first blog comes from our Director herself and the story of her own AAT studies and the various ups and downs that she went through – chances are many of them are the same as yours!​

I started my AAT studies way back in 1997, when there was no such thing as Excel and the internet was still in its infancy. Having floated through school and college without much interest in studying, I was now floating through my first few years of working life in much the same way, not really knowing what I wanted to do.

I was in a finance admin role, that had started out as temporary but later made permanent. I was processing creditor invoices for payment and inputting journals for the Accountants. But after doing this for two or three years, I was starting to get bored and knew I wanted more from my job; working in the open-plan finance office alongside the Accountants, I’d heard about AAT as a way to progress, so I asked if I could go to College to work towards the qualification.

For my first year, I attended College two evenings a week after work. I still had the same half-hearted approach to my studies as when I was at school and, needless to say, my first year didn’t end well.

In those days, we had one exam at the end of the year, and this comprised of three sections. You had to pass all three sections to pass the exam overall; fail one section and you failed the whole exam and a re-sit would follow (I’m sure you can guess what’s coming…?!).

After waiting a couple of months for my result, and the postman, to arrive this shy student – who didn’t like to ask questions in class or do much revision outside the classroom – failed her first exam. On the double-entry element! Not the best start to my AAT studies, that’s for sure!

Thankfully, my manager let me continue with Level 3 (as I was still keen to continue), and re-sit my Level 2 and, it was at this point, that I gave myself a good talking to. I knew I needed to up my game and put in the extra hours of study required if I was going to pass these exams and achieve my qualification, and my MAAT letters.

But it wasn’t all plain sailing, there were plenty of tears and tantrums along the way!

Working in Local Government Finance, the size of the accounts there were much bigger than a sole trader or partnership, as you can imagine, and one of my biggest struggles was trying to relate what I had learnt in class back to what I was doing at work.

In the office, everything was on the computer; I couldn’t work out where the separate Purchase and Sales Ledgers were, let alone all the General Ledger accounts. It was all very confusing!

A few months after starting my AAT studies, I was promoted to Assistant Accountant. Very exciting! Part of this role included the monthly bank reconciliation. This was something I really enjoyed not least because it was a task I could really get my teeth into. It would take a good three or four days (depending on the number of discrepancies) to complete due to the large volume of transactions being processed.

Yes, that says three or four days! This is not a typing error. Hundreds of payments were being processed every month, predominantly cheques in those days too, not many BACS transactions at that time (remember we’re back in the late nineties here!).

I really enjoyed this task and became very proficient as I learnt the various systems and processes of the office, as well as the principles behind carrying out the bank reconciliation itself. But, when this came up in my AAT studies, a bank rec for a sole trader with only a few cheques passing through their accounts each month, I struggled! The concept was the same, so what was my problem, why couldn’t I do it?!

I almost had to un-learn everything I knew from work - from ‘real-life’ - and learn the AAT way of carrying out a Bank Rec. One of many stressful moments during my AAT studies.

As the end of Level 3 approached, those of us who were progressing onto Level 4, were given the opportunity to work on their project over the summer holidays before starting Level 4 in the September. We had to complete a project based on an ‘internal system control weakness’ and provide recommendations on how it could be improved. There would be a tutor to assist us over the holiday period and I went for it.

I’m so glad I did. To have that passed and ticked off before getting stuck into my Level 4 studies was a great relief; I would have really struggled to keep on top of my project alongside my studies. I later heard many stories of students who waited to work on their project after their Level 4 studies but never got around to it. Such a shame after all that hard work – no project, no MAAT letters.

In August 1999, I received my final set of exam results confirming I had passed and achieved my AAT qualification! Hooray! What a relief. I had worked hard over the last 18 months to achieve this qualification; I was tired and I was never studying again… 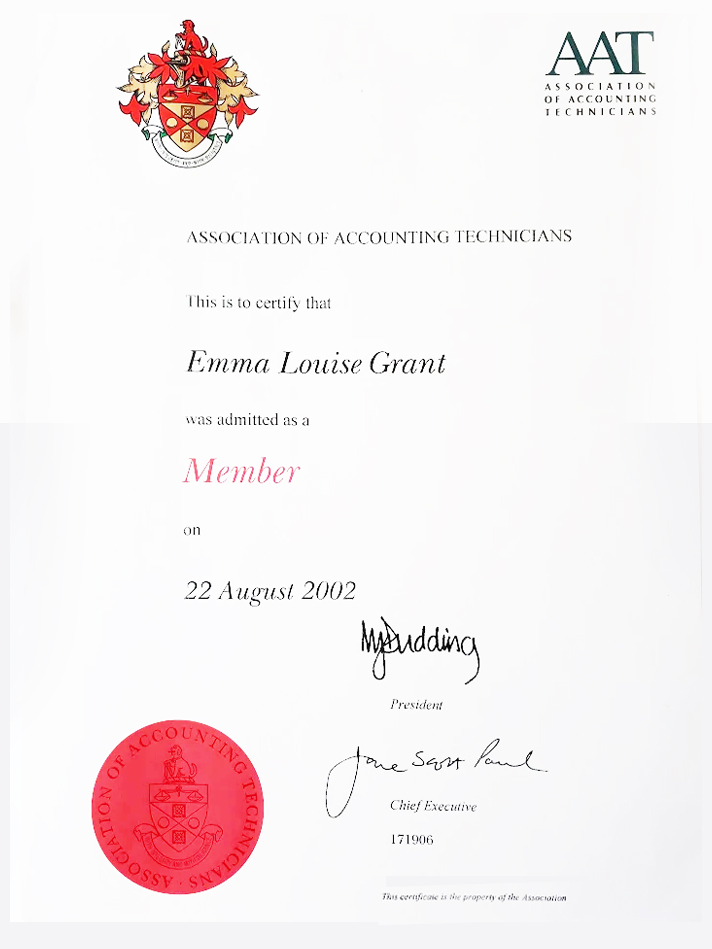 The observant readers will notice it took another couple of years for me to apply for my AAT membership!